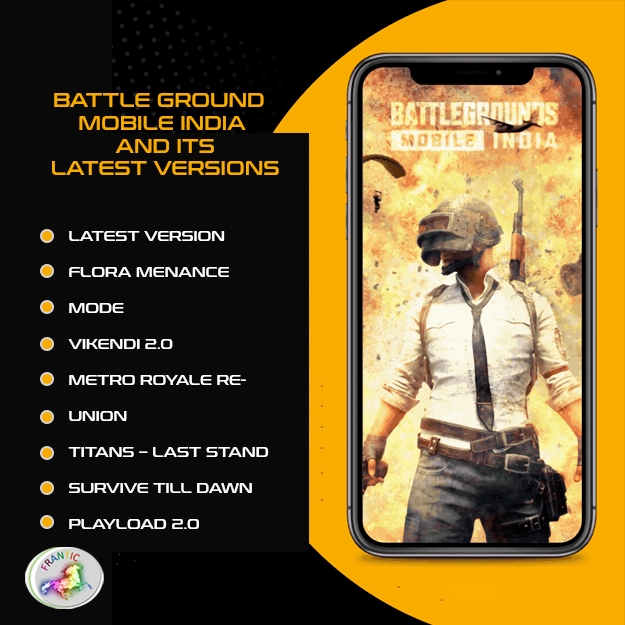 All about Battle Ground Mobile India and its latest versions

BGMI was firstly known as Player Unknown Battleground. PUBG is an online multiplayer battle game. The game was inspired by the Japanese movie Battle Royale. From that movie only the developers got the idea of creating a battle royale game ventured into an independent game under Greene's inventive heading. The very first PUBG was released for Microsoft Windows and then it is also released for Xbox. PUBG is a free mobile game version for Android and iOS and it was released in 2018. In a game around 100 players can participate, with the use of the parachute they all land on the island where all the necessary things are available which will help them in their survival. Necessary things include weapons, health kits, vehicles, etc. They need to use these resources and survive in the battleground by killing other players and avoiding getting killed by others. The last standing player of a team wins the game round. In order to make the game interesting, the battle area gets shortened so that the players are able to encounter each other and the game can become more interesting.

PUBG is the highest playing game in India but due to data privacy conflict, it was banned in India. According to IGN, the data of Android devices was being sent to Tencent owned by China servers. The data is stored in the local servers of the country and PUBG includes data such as your ID, IP address, registration time, login time, transactions linked to player ID, social media details, Advertising ID, audio and text chats all the list of APKs and running apps and more. The personal data of the user was getting stolen and then transmitted that data to the local servers of the other countries. Due to this privacy conflict, the PUBG mobile was banned in India. India is a huge market for PUBG mobile. When it was banned the stakeholders suffered a loss of $34 billion.

With the huge demand of this gaming platform, the developers decided to re-launch the application with new data privacy policies and also with a new name BATTLEGROUND MOBILE INDIA. BGMI is developed and produced by the South Korean company “Krafton”. The craze for BGMI was so much that the developing company needed to start pre-registrations for the game. Within one 2 weeks, the developers received about 20 million pre-registration applications.

Nowadays the latest version of BGMI is prevailing in the market. As stated in Google Playstore the essential version of Android mobile is 5.1.1 or above with at least 2 GB RAM memory. With the passage of time, the updates for mobile applications are also improving. With the improvement of mobile applications, the versions of BGMI is also increased. Nowadays the latest version of BGMI is the 1.6 version which was released on 14 September for both Android and iOS users. Many changes have been done in the game by Krafton. The latest features of BGMI are as under-

Krafton has conveyed this Flora Menace mode for their excellent modes including Erangel, Livik, and Sanhok. Makers have conveyed a position post on their Instagram which peruses, "The Flora Menace Mode will be connected to bearing the assault". This Flora Menace mode highlight incorporates Zillion Matrix, Life Barrier, and Dynahex Supply features. This mode will blow off your head. To make the game more creative, unprecedented, and interesting the designers have added this new gaming mode to Erangel. This element can make gameplay more interesting and exhilarating than classic rank mode.

Vikendi 2.0 is the new map in an improved form. The new re-mastered map is more incredible and naturalistic than different maps accessible in BGMI. The designers are trying to present this Vikendi 2.0 version from PC to BGMI mobile version. Gamers will be seeing programmed trains running everywhere, snow island consists of more trees and less snow on the ground, and finally, Dino Park which makes it more fascinating to play. It comprises more compounds where more intense games could be played.

This old game endurance mode has come back with greater progression in different parts of the Metro Royale. Gamers even presently need to investigate the guide and plunder the provisions to offer them in the market to get cash and can buy high-ranking weapons and gear.

You got a chance to experience this game mode in the Kong and Godzilla update previously. It's a story mode where four players will deliver on a significant boat and witness the titan clash of Kong and Godzilla against Mechagodzilla.

There are different numbers of gamers who haven't experienced this PvP and PvE mode. However, the gamers who are moving from PUBG to BGMI have effectively encountered this mode. In this mode, the players need to battle or escape from the zombies and they likewise need to endure until every one of the foes loses their lives. You are given weapons, safeguard, medkits, and one more basic thing to persevere. Besides zombies, players similarly need to kill other human foes to win.

This is an old game mode wherein gamers will track down substantial weapons and furthermore, they can play with rocket launchers, helicopters, armed vehicles, etc. The landmark will be more extreme and hazardous with these weapons.

It's another zombie mode in BGMI update 1.6 yet you can be the zombie. Two gatherings of player-controlled zombies and player-controlled Defenders will battle. Each match has three rounds. Each round continues till 3 minutes and 25 seconds. Zombie players need to attack Defenders with fight attacks and make them debased inside 3 minutes. Infected players are picked erratically inside 25 seconds.

Wind Rune, Ice Rune, and Flame Rune are three main runes with different powers. One can choose any of the runes and accept its two forces which can be speed buff, harm buff, and safeguard buff, etc.

This new game mode occurs on the guide Livik. There are two difficult situations, including Easy and Normal. Both of them are in the Beta test. In VS AI, players will work together with various players to fight against an AI group. In any case, these AI players are more dangerous than bots. Try not to misconceive them.

The upcoming version of BGMI 1.7.0